Automatic biochemical analyzer is a kind of instrument that imitates manual operation to complete some or all of the steps in biochemical analysis, such as sampling, reagent addition, removing interferences, mixing, heat preservation, colorimetry, result calculation, writing report and cleaning. It can be used for the analysis and determination of various reaction types such as timing method and continuous monitoring method.

Besides the determination of general biochemical items, some can also be used to measure the hormone, immunoglobulin, blood concentration and other special compounds, as well as the application of enzyme immunity and fluorescence immunoassay.

Automatic biochemical analyzer belongs to optical analytical instrument, which is based on the selective absorption of light by substances, namely spectrophotometry. Monochromator divides the complex light from light source into monochromatic light. Then, the monochromatic light of a specific wavelength passes through the colorimetric cell containing the sample solution, and the photoelectric converter converts the transmitted light into electrical signal, which is sent to the signal processing system for analysis. 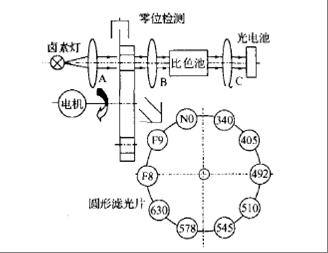 Spectrophotometer is a method based on the selective absorption of electromagnetic radiation by different molecular structures, which belongs to the analysis of molecular absorption spectrum. When the light passes through the solution, the molecule of the measured substance absorbs the monochromatic light of a certain wavelength, and the intensity of the absorbed light is proportional to the distance of the light passing through.

Although it is known that Bouguer proposed the mathematical expression of the above relationship as early as 1729, it is generally believed that Lambert first found the expression in 1760.

The mathematical formula is as follows:

Beer’s law is equivalent to Bouguer's law, but Beer's law is expressed in terms of concentration. The two laws are combined to form the Beer Bouguer law:

Where C is the concentration of the light absorbing substance (common unit in g / L or mg / L). The linear expression is obtained by taking the logarithm of 10 as the base:

The above expression is usually called beer's law. It shows that when the monochromatic light of a certain wavelength passes through the solution, the absorbance of the sample is directly proportional to the concentration of the absorber in the solution and the distance of the light passing through.

There are 8 channels on one instrument, which represent 8 detection wavelengths. Eight photocells are needed respectively.